The failure of conservatives to invest in and control media is the decisive strategic mistake in the 20th Century triumph of Progressivism.

If you look at the nearby chart of Big Media, then you will know the conservative counter offensive has been laughable. (Chart: Leaders of the Progressive War on America. Major U.S. Media Companies.) 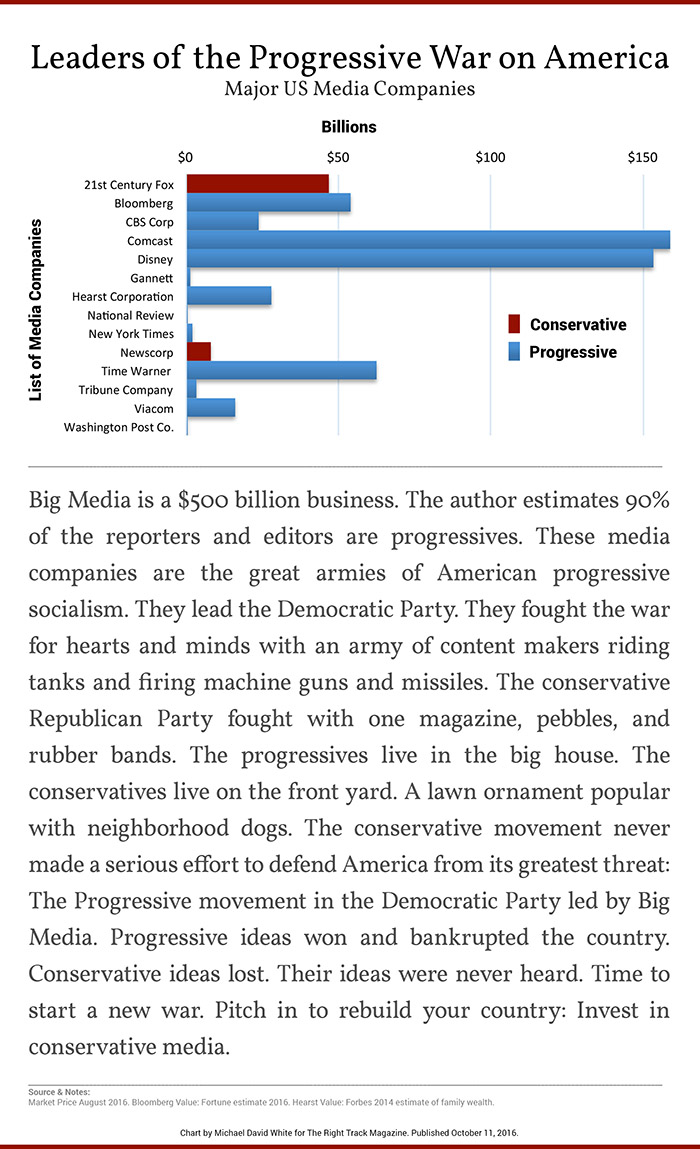 Big Media is a $500 billion business. The author estimates 90% of the reporters and editors, actors and producers, and creatives of all kinds, are progressives. These media companies are the great armies of American progressive totalitarian socialism. They lead and run the Democratic Party. They fought the war for hearts and minds using an army of content makers who fight with the equivalent of tanks and machine guns and missiles. The conservative Republican Party fought with one magazine, pebbles, and rubber bands. The progressives live in the big house. The conservatives live on the front yard; a lawn ornament popular with neighborhood dogs.

The conservative movement never made a serious effort to defend America from its greatest threat: The Progressive movement in the Democratic Party led by Big Media went all the way in, and, among other things, progressive ideas won and bankrupted the country. Conservative ideas lost. Conservatives stood by and did nothing. Their ideas were never heard.

Time to start a new war. We must pitch in to rebuild our country. We must invest in conservative media.

Conservatives must start a new war for the great fortune which America gives to the world.

We promise each individual the opportunity to work, to save, to think, to study, to write, to speak, to lead, to travel, to build, to pray, to succeed, to fail, to start over again. These are the great things a free person might want to do. Might dream to do. How could anybody hate the miracle called America?

The vain, the angry, the lost, the neglected, desperate for attention, will attack anything that builds themselves up. Especially they will attack what is great and good. What is more basic in human nature than envy of what is superior? Progressives hate America to love themselves more. They attack America not because of what America is but because of who they are: Insecure desperate people hell bent upon adulation who will break anything to win power.

Conservatives have taken far too long to see the hatred and destruction at the heart of progressivism. Now we have a calamity to navigate.

Had we grown up in slavery we would know more perfectly why our freedoms are a dream. We would be devoted to fulfilling the wishes of approximately 100 billion persons, the rough total of the number of persons who have lived since the beginning of time for human beings. They lived the last 200,000 years under the rule of warlords or monsters or slave masters. Americans live to vindicate the 10,000 generations who slaved under the rule of kings in a state of barbaric poverty.

Here in America, in the land of the free, we serve God not the king. We serve our family not the king. We will fight to defend our country only if it guarantees divine privileges we inherited at birth to be free to choose the meaning of our own lives.

Before America the world was filled with slaves and serfs, peasants and nobodies. The very names of the serfs and the slaves is embedded with thousands of years of suffering, poverty, dirt and tears. We, the Americans, are still free men and women, but the progressives are hell bent upon imprisoning us. They want to sell us back into slavery to the state. They have done a very good job. We are well on our way to a life of imprisonment. Conservatives have failed.

Conservatives must admit we have failed America. We have not earned our inheritance. We believe in America, but the proof of our shy weakling defense is that we have not saved it. We have neglected our obligation to America. We have given reign of our great nation to the deranged. Good men have worked hard for our side, but a vast multitude of other good men stood by and did nothing.

Almost all of us have done nothing.

If we decide to save our country, to rebuild it after the fall, we must be willing to fight and die. We must embody the killing spirit. We must be committed to destroying the perfect evil which is progressivism.

If we fail to cut out and burn the progressive cancer, we may guarantee that one day there will be a literal call to arms of Americans against themselves. It’s obvious now civil war may already be in our stars. This is what we have allowed the progressives to accomplish. It’s their evil, their goal, their wish, and our shame.

Nobody knows where the anarchy will lead.

Many Republicans have been cooperating with the progressives. The advocates of bipartisanship are now proven partners in the construction of hell. They were dead wrong to go along.

The financial bankruptcy of the United States is preordained by Social Security and Medicare. It is unstoppable.

It will take decades to burn out the chaos which lies ahead. You cannot clear the evil of 100 years of progressive federal programs and moral desecration in five or ten years. Unless we have five or ten years of conservative revolution.

Our work ahead to prepare is clear. We must destroy the Progressives. We must gut and sink their programs and laws and regulations. Cut. Simplify. End. Close. Manage carefully the destruction of everything they built. Plan the way back to a free America. Get to work on making the country safe again for the American dream. That is our part to lead the world toward the great gift to life called America.

This job cannot be done by moderate conservatives. Happy warriors had their chance to save America. They failed.

Bring in the unmanageables at this advanced hour in the fall of America.

Give me extremists. Give me angry fighters. Give me revolutionary conservatives.

Prepare to fight and die, and take up the the killing spirit.

Kill with words. Kill with words to change minds and hearts. Rally the voters. Don’t abandon honesty, but fight with a violent angry spirit. Use a fighting spirit the conservative movement has never possessed. Anger is not a mistake. War uses anger for a high purpose.

Decency and calm argument and bipartisanship has guaranteed the failure of conservative ideas. Trusting Big Media is our great shame. We must acknowledge and abhor it. Time to change course. Hit hard. Hit often. Hit again. Aim to kill.

Go ahead and stand athwart history if that is how you picture it.

Yell “Stop!”. The progressive train is barreling down the tracks of our American life. They have filled every boxcar of their suicide machine. They carry every deadly bomb known to man.

Blind vain sociopathic ideologues are deaf. They have ignored our words for decades. They will ignore our words now. They have no reason to listen. They own everything. They will not stop. Our words signify nothing.

We must take action against them. We must do what needs to be done.

Enter history. Destroy the progressive train. Explode it. Kill it. Burn it. Drowned it. Keep hitting. Keep hitting until the job is done perfectly. 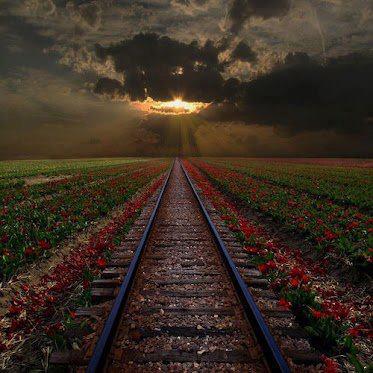 And when the train is stopped, when it is dead and buried and broken, go back home. America will be back on the right track. We can live a quiet normal life. We can take pride in fighting and destroying the greatest evil force in the history of the world.

Our country may win preeminence again as a nation. We may give to all its citizens the greatest gifts a person may win from a state. We can lead the world toward the greatest good which is possible. We desperately need a leader to inspire our patriotic love for killing evil.

Progressivism is the greatest death wish which has ever been invented by man. Their angry mob is everywhere, viciously pursuing suicide by murdering America the beautiful. The professors are its preachers. The reporters and editors are its servants. The actors and directors are its voice. The foundations are its money men. The Democratic Party is its king. Vanity rules them all. Lies are their deadly weapon. Power is their purpose in life. Destruction is their secret wish.

This criminal enterprise in no minor force. When you tally their power — in media, in the arts, in academia, in the foundations, in big tech, and in the federal bureaucracy — they are unbeatable. If progressives take over the military and police they will be unstoppable. We will live under a dictatorship of the progressives.

We know progressives will use any means to achieve their gruesome ends. They are dangerous and deadly. They have bankrupted America with entitlements. They have an unrivaled record of murder in foreign lands. In China. In the Soviet Union. In Cambodia. In Germany. They have an unrivaled record in bankruptcy. In Detroit. In Venezuela. In Greece. In the Soviet Union. Our new century will be filled with a long string of progressive state bankruptcies, but the progressives will continue to call for the new creation of socialist states. The financial fall of the United States will be their greatest achievement; even greater than winning the Russian civil war started in 1917.

The progressives have massacred our moral force. They have broken up the family. They have murdered God. They are desperate for more power. They are amoral and sociopathic. They want to control everything and destroy all.

It’s time for each of us to think ahead about our job. Time to go to war with our words and voices in newspapers and on television and radio. Time to cast our votes in great numbers as citizens and legislators and local board members. Time to speak up with neighbors and friends. Time to organize civil disobedience. Time to call this vicious progressive evil by its true name.

Progressives have a demonic poisonous psychological disease. They cannot be cured of their illness. Their plague has spread. It corrupts all who embrace it. It ruins mind heart and soul.

Time to fight. Time to win.